Jess’s Staff Pick of the Month: Harrow the Ninth 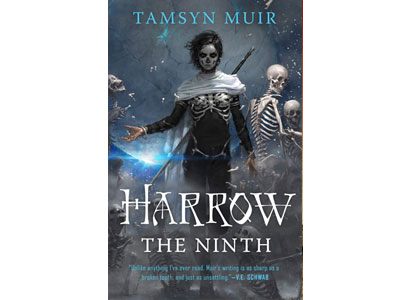 A bone-curdling journey through Harrow’s broken mind, HARROW THE NINTH is somehow even more soul-crushing than GIDEON THE NINTH.

After reluctantly becoming a Lyctor, Harrow is left reeling in her new body and struggling to accept her new reality: training with three ancient warriors – one of whom wants her dead – as well as living alongside mentally unstable Ianthe, and the God she’s worshipped her whole life. She is hallucinating and losing her grip on reality while trying to prepare herself for the greatest foe she’ll ever face: a hulking monstrous ghost that’s been hell-bent on killing God for ten thousand years! This book is a fever dream, a fanfic, and a lamentation of grief and it somehow works. Tamsyn shattered the sky high expectations I had after reading GIDEON, and the ridiculous juxtaposition between the terrifying creatures, Harrow’s shattered mind, and hilarious banter is a brilliant contrast!