OUT by Natsuo Kirino 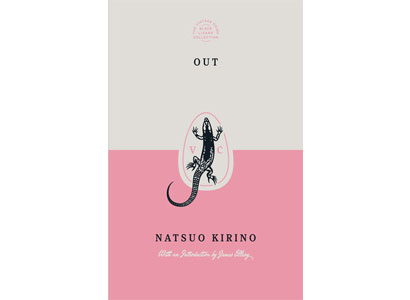 It’s a new year and a whole new selection of mysteries. To start of the year, we are travelling to Japan for something new and different!

Nothing in Japanese literature prepares us for the stark, tension-filled, plot-driven realism of Natsuo Kirino’s award-winning literary mystery Out. Featuring an introduction by James Ellroy.

This mesmerizing novel tells the story of a brutal murder in the staid Tokyo suburbs, as a young mother who works the night shift making boxed lunches strangles her abusive husband and then seeks the help of her coworkers to dispose of the body and cover up her crime. The coolly intelligent Masako emerges as the plot’s ringleader but quickly discovers that this killing is merely the beginning, as it leads to a terrifying foray into the violent underbelly of Japanese society.

At once a masterpiece of literary suspense and pitch-black comedy of gender warfare, Out is also a moving evocation of the pressures and prejudices that drive women to extreme deeds, and the friendships that bolster them in the aftermath.