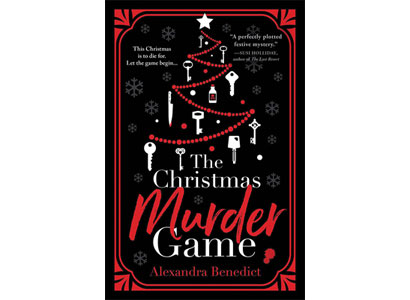 And so it is December, when the group picks a lovely holiday murder mystery. Yay! We have read such a variety over the years, from the very worst, to the not so bad. What will this year bring? We can only read on!

Because this is the holiday read, we will be meeting at 6 p.m., at a setting to be determined for our annual holiday party. Stay tuned for the details.

Twelve clues. Twelve keys. Twelve days of Christmas. But how many will die before Twelfth Night?

The annual Christmas Game is afoot at Endgame House, the Armitages’ grand family home. This year’s prize is to die for—deeds to the house itself—but Lily Armitage has no intention of returning. She hasn’t been back to Endgame since her mother died, twenty-one years ago, and she has no intention of claiming the house that haunts her dreams.

Until, that is, she receives a letter from her aunt promising that the game’s riddles will give her the keys not only to Endgame, but to its darkest secrets, including the identity of her mother’s murderer.

Now, Lily must compete with her estranged cousins for the twelve days of Christmas. The snow is thick, the phone lines are down, and no one is getting in or out. Lily will have to keep her wits about her, because not everyone is playing fair, and there’s no telling how many will die before the winner is declared.

Including additional scavenger hunts for the reader, this clever murder mystery is the perfect gift for fans of classic mysteries, festive Christmas books, and armchair detective work.