THE LAST PLACE YOU LOOK by Kristen Lepionka 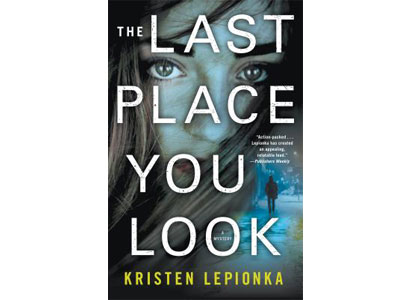 We picked this author from our Best American reading in January and can’t wait to see how it pans out! The Last Place You Look is a head-on collision between an allegedly closed case and a tenacious, troubled private investigator who doesn’t know when to quit.

Nobody knows what happened to Sarah Cook. The beautiful blonde teenager disappeared fifteen years ago, the same night her parents were brutally murdered in their suburban Ohio home. Her boyfriend Brad Stockton–black and from the wrong side of the tracks–was convicted of the murders and is now on death row. Though he’s maintained his innocence all along, the clock is running out. His execution is only weeks away when his devoted sister insists she spied Sarah at an area gas station. Willing to try anything, she hires PI Roxane Weary to look at the case and see if she can locate Sarah.

Brad might be in a bad way, but private investigator Roxane Weary isn’t doing so hot herself. Still reeling from the recent death of her cop father in the line of duty, her main way of dealing with her grief has been working as little and drinking as much as possible. But Roxane finds herself drawn in to the story of Sarah’s vanishing act, especially when she links the disappearance to one of her father’s unsolved murder cases involving another teen girl.
The stakes get higher as Roxane discovers that the two girls may not be the only beautiful blonde teenagers who’ve turned up missing or dead. As her investigation gets darker and darker, Roxane will have to risk everything to find the truth. Lives depend on her cracking this case–hers included.
Event Date & Time
March 10, 2022 at 6:30 pm
Event Venue
White Birch Books
Event Location
2568 White Mountain Hwy
North Conway, NH 03860